Dear PstD readers – I’ll be travelling down to Providence, RI this week to participate in Necronomicon 2017 (after a brief stop in Salem, MA, always hard to resist, especially as I’m keen to see Metallica guitarist Kirk Hammett’s collection of pulp sf/horror art at the Peabody Essex Museum, on display until November 26.)

The organizers have outdone themselves this year in putting together a wide variety of events and a diverse array of presenters, and I’m looking forward to the broader and less exclusively Lovecraft-centric focus on the weird than previous years have seen (and I say this as one invested in studying HPL, his sources, and his influence.)

I’m presenting a talk as part of the Armitage academic track on Sunday morning, (8/20) 10:00-11:15, in the Bristol-Kent Room, Omni Hotel, 3rd Floor. The session is ominously titled  “Emanations of Abominations: Lovecraft Around the Globe.”

My talk is titled “Shadows Out of Space, Colours Out of Time,” and is based on one section of my chapter contribution for the essay collection, The Call of Cosmic Panic: New Essays on Supernatural Horror in Literature (while the peer-review process always makes publication dates tricky to predict, the collection should appear in late 2018.)

The chapter examines how Lovecraft’s ideas of weird fiction and cosmic horror are uniquely suited to both being incorporated in and critically appreciating the formal  and conceptual possibilities of comics as a medium. It considers the centrality of modes of representing temporal and spatial relationships to Lovecraft’s theories of weird fiction and cosmic horror, and how these have been adapted to comics by a variety of writers and artists, including Junji Ito, Charles Burns, and Alan Moore.

The talk (while still absurdly broad) is considerably more circumscribed, and focuses on how mangaka Junji Ito adapts the image/symbol of the spiral from Lovecraft’s work, using it in his magnum opus Uzumaki to unsettle and transfigure perceptions of the human body, space and time. 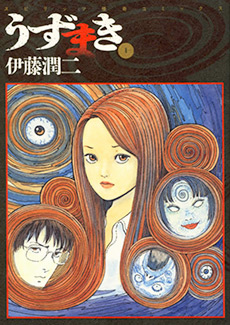 Making subversive use of fascinatingly detailed line-work and the relationship between panels and inter-panel gutters, Uzumaki provides a momentary disruption of “the galling limitations of space and time,” a trait Lovecraft viewed as the central goal of cosmic weird fiction.

I’ll be one of the panelists for “Machinations and Mesmerism”: How Middle European Fantasists & Romanticists informed Modern Horror” Friday (8/18) morning 1030 – 1145 in the Grand Ballroom, Biltmore 17th Floor. The description reads:
“Modern weird fiction is rooted in countless literary genres. The fantastical works of many Middle-European authors (Goethe, Meyrink, Hoffmann, Kubin, Schulz, Tieck, etc.), both notable and obscure, are often overlooked as a strong source of influence to both general horror and modern Weird fiction. Join us for a discussion that will touch upon the worth of these narratives as sources, the themes that share a common thread with the modern weird, authors who may not be thought of immediately when one thinks of current dark literature, and how one might look upon the literary genre critically as forerunners to the present dark literary landscape.”

I’ll also be one of the panelists for “Lovecraft in Context” on Saturday (8/19) 430-545 PM, Newport-Washington, Omni 3rd Floor. The panel description reads:
“Lovecraft in context, more than just a quick annotation, some of Lovecraft’s most obscure references are links to other stories, secret crossovers, and in-jokes to the well-read. Find out what you are missing out by not delving into the details of that off-handed remark.”

I’m in some intimidating company for this one – Leslie Klinger, Paul LaFarge, Steve Mariconda, J.M. Rajala, and Peter Rawlik. These are all scholars/writers I admire, but I’m especially thrilled to be sharing space with Paul LaFarge, whose magnificent novel, The Night Ocean, is one of the most queerly fascinating things I’ve read in recent years.  A sort of multiply-nested piece of vampiric biography, it out-Pale Fire-s Nabokov, examining identity, obsession, fandom, and the will to believe, ingeniously threading Lovecraft and W. S. Burroughs together via R.H. Barlow. If you haven’t read it, I highly recommend it (Douglas Wynne has written a sharp review of it for the Lovecraft eZine here . 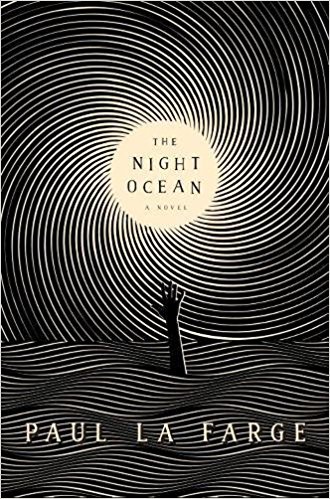 The cover of La Farge’s novel, with its aptly vortical spirals.

Speaking of scholarship on weird fiction and Lovecraftiana, my latest foray into scholarly non-fiction to make it into print came out back in June. The Lovecraftian Poe: Essays on Influence, Reception, Interpretation and Transformation (Rowman and Littlefield, 2017) is a peer-reviewed essay collection that I edited, introduced, and contributed a chapter to; it examines the complex relationship between these seminal writers from multiple points of view, and at a length and level of detail that has never been done before. For the time being at least, you can read the entirety of both S.T. Joshi’s foreword and my introduction to the book here. This project, like most academic collections, was a long time coming together, and had its conceptual genesis in the wake of the first NecronomiCon I attended back in 2013, so it seems appropriate to mention it here.

In September, look  for a longer post about The Lovecraftian Poe, including the table of contents, chapter abstracts, excerpts, links to recent work by the contributors, and some praise from reviewers.

Look, too, for a new Necro(nomicon)scopy, debriefing some of the highlights of this year’s ‘Con,  and an update and schedule for my participation in CanCon 2017, Ottawa’s fantastic annual speculative fiction convention, coming up so-so-happily-soon in October 13-15. 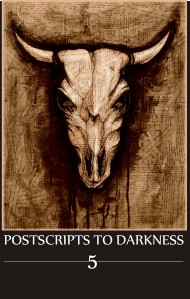 We had the opportunity to talk to CKCU Radio’s Kate Hunt, one of the hosts of Literary Landscapes, about Postscripts to Darkness in general and Volume 5 in particular. Kate asked co-editor Ranylt Richildis about the magazine’s origins, what it is about horror that fascinates the public, the role of editors in diversifying author representation, and the emergent speculative fiction cluster in Ottawa. Click here to listen to the interview.

The 2014 Aurora Award nominees were announced this week, and we’re delighted to see one of our own on the list. Helen Marshall’s poem, “The Collected Postcards of Billy the Kid,” first appeared in Postscripts to Darkness Volume 4 in October 2013. As our Poetry Editor Dominik Parisien wrote in his introduction, the poem “provides us with ‘the lost years’ of yet another literary figure, Billy the Kid, and fills them with uncanny images and queer beauty.” It’s wonderful that Canadian readers apparently agree, enough to lift a swell of nominations Helen’s way. We wish her all the best at the awards ceremony in October.

We’re also happy to see that PstD friend and interviewee Amal El-Mohtar earned two poetry nominations on the same ballot, and that Matt Moore and ChiSeries Ottawa earned a Best Fan Organizational nomination. As regulars at the Ottawa ChiSeries readings, we can attest to the literary merriment to be had at these events, and we’re grateful for the way they glue the Ottawa SFF community together. There is so much fine talent in these here parts and it’s wonderful to see that talent gathered and celebrated on a regular basis. May ChiSeries endure into infinity. 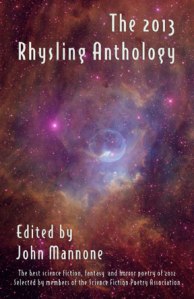 We’re very pleased to announce that a poem published in our fourth volume has been nominated for a 2013 Rhysling Award (long poem). Helen Marshall’s “The Collected Works of Billy the Kid” has been described by our poetry editor, Dominik Parisien, as a “reimagining and interrogation of literature,” one that “provides us with ‘the lost years’ of […] Billy the Kid, and fills them with uncanny images and queer beauty.”

Speaking of Dominik, we’re pleased to see that he himself has been recognized in the long poem category for the 2013 Rhysling. His piece, “Sand Bags,” appeared in Strange Horizons this past November and jarred us: “the hole is an open    mouth/ and her tongue throws     words /like sand bags.”

Hats off to both of you lovely people. 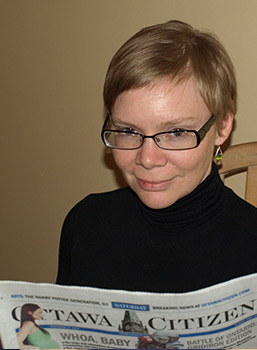 The Fulcrum gave some space to the talented Kate Heartfield, fiction writer and journalist whose short story, “Six Aspects of Cath Baduma,” is featured in Postscripts to Darkness Volume 4. A nice gift indeed for all involved on the eve of the issue’s unofficial proto-launch at Ottawa’s 2013 Can-Con. From Heartfield’s tale of warrior goddesses:  The rest of us got better-looking when Cath gave us our powers. Well, better isn’t quite the word. The hues of our skin were just slightly off anything found in nature. Our eyes were just a little too big for our faces. The wind that blew our hair blew for no one else. That kind of thing. But the Washer looked like a woman, an ugly woman. She was pale, her eyes dark pits behind lank hair. She went naked above the waist in all weather, her dugs puckered in the cold, her long skirt dark with water and mould.

You can read the full interview here. 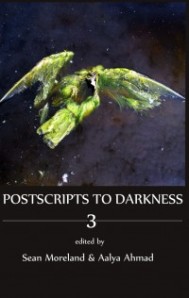 The very fine and very kind Derek Newman-Stille of Speculating Canada recently reviewed Postscripts to Darkness Volume 3. Here’s some of what he had to say:

This will be the third Postscripts to Darkness volume that I have reviewed, and it is the best so far. The quality of the writing and artwork is even more impressive than the first two volumes. The stories in Postscripts continue to show their willingness to interrogate the dark, to go to places where other narratives shy away from. Along with monsters, conjurings, altered perceptions, gruesome creations, and horrifying deaths, Postscripts is willing to cast its dark light upon issues like alcoholism, drug addiction, family violence, incest, the death penalty, and other areas that are relegated to the dark or ignored because mainstream society doesn’t want to deal with them or finds them unsavory. Postscripts casts a particularly enlightening form of darkness upon the vision of those who seek to avoid the realities that serve as an undercurrent to their reality, and this particular flavour of horror is well suited for casting readers into a darkness they resist dealing with in their everyday lives.

You can read the full review here.

More love from the tastemakers

For such an early incarnation of our press, Postscripts to Darkness Volume 2 sure is The Little Issue that Could. We already boasted about how Chris Willard’s “What a Picture Doesn’t Say” was selected for Imaginarium 2013: The Best Canadian Speculative Writing, while Ranylt Richildis’s “Long After the Greeks” earned an honourable mention. Now we learn that Daniel Lalonde’s “St. Gertrude’s Boys’ Choir” found its way onto Ellen Datlow’s long-list for The Best Horror of the Year Volume 5. We could not be happier for Danny, erstwhile contributor and current PstD designer. Three PstD 2 tales given such accolades? We blush.

Lastly, warm congrats to friends of PstD and canny editors Amal El-Mohtar (Goblin Fruit) and Michael Kelly (Shadows & Tall Trees), who first published work that Datlow will include in The Best Horror of the Year Volume 5. Thanks for bringing such lovely lays to light.

Our cup runneth over: Postscripts to Darkness has been honoured four times over by ChiZine Publications‘ Imaginarium 2013: The Best Canadian Speculative Writing. First, Christopher Willard’s “What a Picture Doesn’t Say” made the Table of Contents as one of the best tales of 2012, which appeared in PstD Volume 2. Our founding editor, Sean Moreland, earned an honourable mention for “Unrah, Late of Old Vegas,” which appeared in The Peter F. Yacht Club. Our poetry editor, Dominik Parisien (whose work is sweeping the anthologies this year) has two poems in the Table of Contents and three honourable mentions. And our newest story editor, Ranylt Richildis, earned an honourable mention for “Long After the Greeks,” published in PstD Volume 2 before she joined our staff. Congratulations everyone, and much gratitude to ChiZine Publications and Imaginarium 2013‘s editors for the love.

Treat yourself to a copy of Imaginarium 2013 when it’s released next month; these collections have become an annual event in speculative fiction, and dearly prized by readers and writers alike.