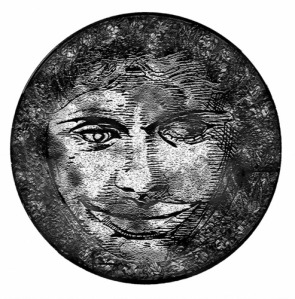 We call it the Mouth but in aspect it was really a face. As it came to light (we used pine boughs to brush dirt from crannies), we found a round, moony countenance in the forest floor that confronted us with one open eye and one closed, and a mouth three times too large for them, out of ratio. The face spanked of the ancient. Its lids were hooded; it winked at us, no pupil in the gray stone sclera of the open right eye. The nose was two dainty points. There were lumps at either side of the moon that suggested ears. We dug, but didn’t find neck or shoulders in the ravine’s floor. We dealt with the disembodied.

From “Long After the Greeks,” by Ranylt Richildis

Here’s what you’ll find in Volume 2, which launches August 2012:

In the Hotel, by Zachary Abram (ill. Cynthia Colosimo)

Make Him Talk, by Sean Demory

Long After the Greeks, by Ranylt Richildis (ill. Miles Tittle)

What a Picture Doesn’t Say, by Chris Willard

Volume 2 also features cover art by Rob Thompson and an interview with Lee Thomas, the Bram Stoker Award-winning author of Stained and In the Closet, Under the Bed, conducted by James K. Moran. (“Objectification is an odd thing — it should be a very obvious and simple thing to people and for some reason it’s not. They don’t understand that the process of objectification is the first step towards hatred and violence and they go ‘Lighten up; it’s just name-calling.’ Yeah, at what point does it stop, though?”)