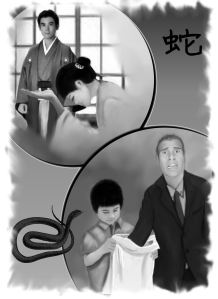 It masked the should-have-been scents of everyday life. In that neighbourhood, there was no nutty aroma of rice cooking, no thorny musk of incense drifting from the temples, no herbaceous fragrance of fresh vegetables pulled out of the earth emanating from the large open warehouse doors of the green grocer. Yet, every day at ground zero I passed an eerie abandoned building bearing a political slogan about how precious life is, and I always felt bad for the little restaurant next to it. The usual warmth of lunchtime cooking should have been drifting in a breeze of sizzling meat, yet there was only a strange smell of something terrible and sinister—a smell that killed all the other smells.

Here’s what you’ll find in Volume 4, coming this October:

The Door in the Wall, by Stephen Owen (ill. Luke Spooner)

This issue also features poetry by Aurora nominee Helen Marshall, cover art by Tais Teng, and an interview with Genie nominee Tony Burgess, author of Pontypool Changes Everything, conducted by Aalya Ahmad. (“I believe that the willing suspension of disbelief should not be automatically granted by the first line — it has to be earned over the course of the book, its new terms discovered — useful only this once, perhaps, on this one page in this one line.”)