An Interview with Tony Burgess

Tony Burgess is the man behind “Pontypool.”

This interview first appeared in Postscripts to Darkness Volume 4, a companion to Tony Burgess’s masterful short, “Soft Shell Story.” Tony speaks with PstD editor Aalya Ahmad about the writing process, language and character, and adapting his work for film. His latest novel, The n-Body Problem, is available from ChiZine Press.

AA: Can you tell us a bit about how and when you started writing?

TB: I started writing pretty much when I could spell. I used to tell stories to my family on car trips and do plays for the neighbourhood in my basement. Make short Super 8 films. My main focus, up until my 20s, was visual art and the rest was a kind of sidebar. I believed, as a child, that pretty much everything was worth altering. I was less about showing than the private route. I still have that feeling. The beginning of anything for me is stepping outside and turning rocks, finding things on the ground, painting grass…I am an aging finger-painter.

AA: What do you think about “horror” as a label for certain kinds of writing or film? Is it useful? Is it a term you associate yourself with?

TB: I would, yes. It was my first love as a child and I still chase it all the time. What I like about horror, or genre writing or spec or whatever you call it, is that you can smuggle anything in. It is a world that hungers for novelty and gets a lot of remakes and retools. So there’s lots of appetite for adventure. The literary scene is more conservative, more self-conscious of itself – which is wonderful and disciplined. The preservation of an argument through exclusive principles. An argument typically about inclusivity. I just find I am uncomfortable if something is just one thing.

AA: Whom would you consider yourself influenced by? Any favourite books/short stories/plays?

TB: Hmmm. I find as I go along that my influences are less with me. And, even then, influences shift pretty dramatically from day to day. This was the year of Pierre Guyotat for me. He points back. Also Steve Roat from Creemore is fascinating to me. We wear cowboy hats, eat chuck and watch really early John Wayne movies. He creates these really eccentric objects – things he finds and changes. His house is a mad wonder-clutter and the floors and walls are covered with his own trompe l’oeil painting.

AA: Pontypool is in part speculation about the fascinating, and alarming, prospect that a lethal virus can infiltrate the English language. What inspired this speculation? Is there a connection between this idea and William S. Burroughs’s famous formulation, “language is a virus?” Has Burroughs been an influence on you in other ways?

TB: You know, I don’t think Burroughs is someone I think about much, but I read a great deal of him when I was young and who knows how he pops up. The Pontypool virus is not really Burroughs, not language as a virus. But I do recognize Burroughs in this: irreconcilable story elements that are only figures of each other that then degrade into a narrative that somehow lives in the debris between the two or more unlike stories. The parts that don’t translate. Unconnected connective tissue. The excess of a figure. For me Pontypool came out of working with tarot cards for a living.

AA: I’ve heard you mention the inspiration Marlowe’s play Doctor Faustus has had on your work — especially on Pontypool. Could you tell us more about that?

TB: Yes I say that. That final page, for me, is everywhere. The idea of fleeing a place and a contract by inhabiting the words that will convey you to this fate. Inhabiting, hiding, damaging the language that tells you you are here in the hope that you can leave the page, the stage, etc. That you will be released by making noise. You will become visible. I have always been fascinated that audiences would hallucinate Satan on the stage in the last moments of the play and they would run screaming from the theatre. It is such terrific ontological slapstick.

AA: You’ve previously mentioned that one of the influences on your writing has been Alfred Jarry’s pataphysics. How did you first discover pataphysics, and how has it altered your writing? The way you live?

TB: Ha! That’s funny. I haven’t read Jarry in many years but as a teenager Faustroll was my Boy Scout Handbook. We planned trips based on it. Stealing boats in Rice Lake to get to Europe. Jarry helped me discover, when I was not yet a fully formed person, that my imagination and the physical world had ridiculous and brutal influence over each other.

AA: Readers may find themselves perplexed by the odd narrative twists and turns in your books. For example, in Idaho Winter, the author/narrator also functions as a character and the narrator becomes this odd Total Recall-esque head grafted onto another character’s body, mouthing a continuous commentary — in fact, he’s often gagged so his narration doesn’t become disruptive. You’re asking readers to step outside their comfort zones in a way. Can you expand on this?

TB: For me it’s natural that a story is involved in its own making. Not as a meta exercise, but in imitation of the way we talk to ourselves. I also believe that the peril of a story has to be shareable. What is there can’t be ignored, even if it has arbitrary elements, questionable provenance, etc. I believe that the willing suspension of disbelief should not be automatically granted by the first line – it has to be earned over the course of the book, its new terms discovered – useful only this once, perhaps, on this one page in this one line. Then you develop a phatic relationship with the reader’s imagination. You talk over their like of reading. It can’t always work, but it will still read as if it had.

AA: Can we talk a little about your transition to screenwriting? What types of differences do you notice between the two modes of writing?

TB: To tell you the truth, they are beginning to merge for me. Screenwriting is a stage of fiction. Fiction is an early draft of a screenplay. The formal differences are obvious and the way they are produced. Fiction, for instance, you write alone. Screenplays are written for people who want to make money. Nobody expects fiction to make money. 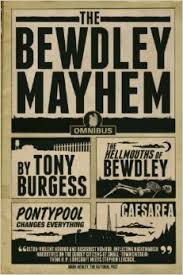 AA: How has writing screenplays and working with filmmakers changed your approach to writing fiction more generally?

TB: It has a great deal, and also felt fairly natural. I now write books as long treatments but I may have always been doing that. Screenplays give you cutting skills, mostly. Never start and never finish, just cut between the two. This helps with fiction – take things away, defer knowing what is there, etc. Honestly they have kind of merged for me. Working in community theatre did as much or more to my writing. Sing to the back of the hall and break everything down into gags.

AA: During your recent visit to Ottawa for a number of speaking engagements, you stayed in the fairly well-known Jail Hostel. The building, as you know, is supposed to be haunted. Did you experience anything supernatural, or otherwise untoward, there? Have you ever had any experiences you’d characterize as supernatural?

TB: I loved the jail and I certainly sat in that room thinking about where I was, but alas, no great ghosts came to me. The house I live in now has a ghostly past; in fact, I’m frequently pulled aside at town events by strangers who ask if the woman still stands in my son’s bedroom window. There are dozens of cats buried in the backyard by a spooky spinster in the 1920s. Our kitchen was a viewing parlour and has a strange coffin window. But I have never believed. Which makes it awkward when I hear people talking, as happens every couple of months, and find myself wandering the house going “Hello? Who’s there?”

AA: What is Tony Burgess most afraid of?

TB: That I am breaking up. My mind, my body. It gives off its own peculiar heat, I suppose, but there is no returning to when you were truly cold and real.

AA: What was the last book you read that really scared the shit out of you?

AA: When you were asked about the quirky ending of the film Pontypool, you said such a question “fills me with rage.” Can you explain?

TB: Can you explain how you expect me to answer this question without rage?

AA: How have your experiences as a parent and the personalities of your children influenced your writing? Are you looking forward to the day when your kids read your novels?

TB: Having kids has had an overwhelming influence. They show up in everything I do now. They are devious, subversive little masterminds. I am in awe of how they instinctively produce for themselves what everything means. If I point out the impracticality of something they believe, or the irrational, they simply pause and wait for the obvious to sink in, that all my thinking is dependent on impracticality, and wait for me to catch up. Children know without saying it — the  one or two ideas we spend our whole lives trying to access.

Aalya Ahmad is a fiction editor at Postscripts to Darkness and teaches English Literature at Carleton University.