Over the more than 150 years since Poe’s untimely demise, there have been many anthologies themed around his life and writings, of widely varying emphasis and quality. While a few have focused on Poe’s legacy in terms of detective fiction, science fiction, or poetry, the vast majority have emphasized Poe as the grand-pappy of, and a marketing locus for, modern horror fiction. 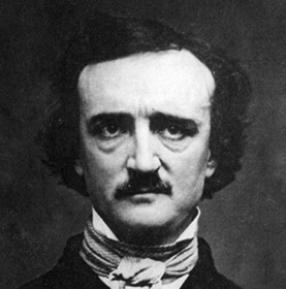 Two notable earlier 21st century examples are Poe’s Children: The New Horror, edited by Peter Straub (Anchor Books, 2008) and Poe: 19 New Tales Inspired by Edgar Allan Poe (Solaris, 2009), edited by Ellen Datlow. Both these earlier collections hold a place of importance in terms of Poe’s continuing popular association with literary horror, but in very different ways. Straub’s anthology is a monumental tome containing over 600 pages of haunting stories by some of the late 20th/early 21st century’s most influential dark fictionists. The anthology’s title and subtitle, however, are probably the weakest thing about it. They clash misleadingly for a number of reasons. 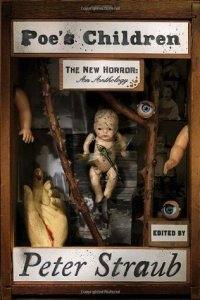 First, the word “new:” the careers of several of the writers whose work this anthology showcases, including Straub himself and the omni-prevalent Stephen King (whose story “Ballad of the Flexible Bullet” is more reminiscent of one of Poe’s satiric extravaganzas than one of his horror tales) date back to the 1970s. Referring to Straub and King (and even Ramsey Campbell and Thomas Ligotti) as “new horror” in 2008 gives an inaccurate impression of what the anthology is all about. In fact, because I am a crabby pedant who is also tired of seeing Stephen King yarns that I’ve had in paperback since 1985 repackaged alongside new fiction, this almost prevented me from buying the book in the first place.

Rather than the showcase for new and cutting edge horror its title suggests, the anthology is more about rehearsing a lineage that supposedly runs from Poe through King and Straub to writers as diverse as Thomas Ligotti, Elizabeth Hand and Glen Hirshberg (an in-store perusal of the stories by these writers, by the way, was what persuaded me to buy the book after all.) The logic runs, I suppose, that they are all “new” in relation to Poe. What, then, about all those writers from 1849 to the 1970s, including, say, Shirley Jackson, or H.P. Lovecraft? They don’t feature in this lineage?

Second, the subtitle is misleading because many of the stories it includes don’t fit readily under the umbrella label “horror.” This tonal and thematic range, however, is one of the anthology’s greatest strengths. In terms of its more recent contributors, it covers a large, dimly-lit field, running from Ligotti’s “Notes on the Writing of Horror” (particularly Poesque in its fusion of cruel critical alacrity and cold, creeping dread) to Glen Hirshberg’s heartbreakingly poignant (but not, by most standards, “horror”) story “The Two Sams” (this collection actually served as my introduction to Hirshberg’s fiction, so was worth the purchase for that alone.)

My third objection to the anthology’s titular concatenation is that, despite its deft use of the uncanny and its powerful tone of “mournful and never-ending remembrance,” there is very little Poe-esque about Hirshberg’s story, and this is also true for a number of the other fictions in the anthology, including Straub’s own contribution. Perhaps the subsuming of a wide range of modern dark fiction to Poe’s supposed legacy may have had some marketing utility, but, despite the great strength of the individual stories it contains, it is ultimately for me the reason why, as a book, particularly one supposedly themed on Poe, Straub’s anthology falls a little flat.

Despite his extensive knowledge of literary horror and his admirable continuing attention to the emergence of new writers and new styles in the field, this is where Straub is sometimes lacking as an editor/anthologist, or as a critic and genre historian: his need to situate the work his anthologies assemble in terms of the late 20th century, quasi-realist New England dark fabulism he shares with Stephen King, and his need to fulfill the obligations of mass-market publishing. Ah well. Poe understood what bizarre bedfellows literary criticism and commercialism make better than most.

Datlow’s Poe-themed anthology, on the other hand, would have been better served by the sub-title “the new horror,” as it showcases an array of newer work, much of it technically ambitious, delightfully transgressive, and thought, as well as sensation, provoking. It doesn’t vie for mainstream, mass-market appeal by the inclusion of “blockbuster” fiction, or make a somewhat fusty case for itself as “serious literature” the way Children of Poe does.

It is also not a collection of reprint-fiction gathered together under Poe’s umbrella, but a collection of original fiction, commissioned just for the occasion. Each story is directly occasioned by some piece of Poe’s writing, and is followed by an authorial commentary that reinforces the connection between the new story and one of Poe’s writings. It includes some of the finest examples of how overt pastiche, allusion, and homage can become transmuted by the right authorial hands into something amazing, unsettling and perversely new in its own right – and this, really, is what Poe himself did best in tales like “The Black Cat” and “The Fall of the House of Usher.” Three of the best examples from the collection include John Langan’s perversely pedagogical “Masque of the Red Death” revision, “Technicolor,” Kim Newman’s brain-clawing corporate horror tale, “Illimitable Domain,” and Kaaron Warren’s Poe-tourism inspired “The Tell.”

In many respects, Nancy Kilpatrick and Caro Soles’ recent nEvermore (Edge Publishing, 2015) taps a similar vein to that of Datlow’s Poe, and it does it with admirable deftness. The book identifies itself as “Neo-Gothic Fiction Inspired by the Imagination” of Poe. It features 22 stories, each of them explicitly inspired by and responding to one or more pieces of Poe’s corpus, and each prefaced by a brief comment from the author(s) indicating its point de depart in Poe.

One way in which the collection departs from Datlow’s is that the stories are usually shorter, and tend (with a couple of notable exceptions) toward the pulpier end of the Poe spectrum – they emphasize sensation rather than subtlety.

Another is that, rather than aiming for the kind of atmospheric horror that predominates in Poe, many illustrate Poe’s fusion of various literary modes with a very modern sort of horror. The introduction by Uwe Sommerlad stresses Poe’s “genre crossing” tendencies, emphasizing the close relationship between Poe’s hyperbolic hoaxes (“The Balloon Hoax,” “Mesmeric Revelation,”) and his absurd extravaganzas (“The Scythe of Time,” “The Man Who Was Used Up’”) his tales of adventure (“The Gold Bug,” The Narrative of Arthur Gordon Pym), and those of detection (“The Purloined Letter,” “Murders in the Rue Morgue”), his tales of compulsive confession (“The Black Cat,” “The Tell-Tale Heart”) and his Gothic fantasies (“The Fall of the House of Usher,” “The Masque of the Red Death.”)

Poe’s tendency to fuse these modes is something many of his readers fail to note (even one so acute and devoted as Lovecraft, who praised Poe’s “cosmic horror” while denigrating his satiric tales, failing to realize how intrinsically tied the two modes were for Poe, and how important this was for Poe’s proto-absurdist achievement), but many of the stories that comprise nEvermore adopt a similar tendency with a manic mixture of grue and glee.

Certainly, straight-no-chaser horror stories are abundantly represented. Christopher Rice’s “Naomi” is a chilling twist on “The Tell-Tale Heart” whose violent terror erupts from its hard-eyed portrayal of homophobia. Lisa Morton’s “Finding Ulalume” uses Poe’s “ghoul-haunted” musical poem to springboard a fast-paced piece of barrel-down horror. Richard Christian Matheson’s staccato “133” rebounds, ellipsis-struck, like a bullet off the side of Poe’s sepulchred “Ligeia.” Carol Weekes and Michael Kelly’s collaboration “The Ravens of Consequence” mirrors the cumulative effect of its source poem, building a textured eeriness that would make it at home amongst the stories in the Datlow collection.

Probably the most formally ambitious story in the collection is “Afterlife,” a collaboration between William F. Nolan, Jason V. Brock and Sunni Brock, which synthesizes aspects of Poe’s legend and biography with his late cosmogonic poem Eureka, putting the results under a kind of amnesiac erasure. The oddest inclusion in the collection is without a doubt a previously unpublished piece of Poe-inspired juvenilia by none other than Margaret Atwood, interesting more for its glimpse into the formation of one of Canada’s most important living writers than as a fiction in itself (for my money, Tennessee Williams’s teenaged weird tales were a lot more interesting.)

In terms of its resonant terror and linguistic control, nothing else in the collection can compete with Tanith Lee’s “The Return of Berenice.” Like one of Poe’s deceptively essayistic tales (“The Imp of the Perverse,” or “Murders in the Rue Morgue,”) it begins more as a periphrastic exposition of “Berenice” than a story itself. Following its recounting of that tale’s events, however, it builds upon them in describing the fate that awaited the unfortunate Egaeus after the end of Poe’s narrative. It is an apt sequel to what may well be Poe’s most horrific tale, and a worthy testament to the career of a writer of tremendous insight and power. Lee did much to open and explore the mythic and lyrical possibilities of fantasy and horror fiction, and deserves a “mournful and never-ending remembrance” of her own. In that spirit, I’ll close by quoting the last line of Lee’s story:

“Creatures of air and wind, we: vehicles, playthings of the gods.”