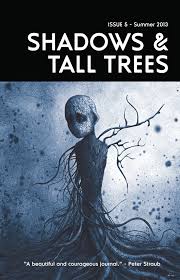 A new review by Sean Moreland

Do you enjoy fiction that creates an atmosphere of terror and wonder through subtle, suggestive, and insidious means? Do you believe that horror and dark fantastic fiction can (and should, and perhaps even must) rise above pulp stereotypes and genre conventions, finding ways to unsettle readers through psychological acuity and literary finesse? Are you interested in short stories that will get under your skin, invade your dreams and waking thoughts, and give you glimpses of strange worlds inseparably interwoven with our own? If you answered yes to any of these questions and you have not yet acquired all available issues of Michael Kelly’s literary journal Shadows & Tall Trees (S&TT), then you have done yourself a great disservice.

S&TT is the flagship publication of Kelly’s Undertow Books. Alongside Kelly’s other editorial ventures into strange literary terrain (including the all-Canadian anthology Chilling Tales and the collection Apparitions), it is one more testament to the vitality of his editorial vision. This vision, and the uncompromising diligence with which he pursues it, makes Kelly an outstanding figure in not only the landscape of Canadian literature, but the international world of weird and horrific fiction at large.

I was introduced to the journal as of the second issue (thanks to the insistence of PstD’s poetry editor, Dominik Parisien) and was immediately hooked. I’ll focus on the most recent issue (5) for the rest of this brief review, but before I do, I want to stress that the consistency and quality of the fiction S&TT has gathered has been unwavering through each issue I’ve read (sadly, copies of the first issue appear to be next-to-impossible to come by). This means that, whichever issue marks your point of entry into the series, you’ll immediately have a strong sense of what makes the journal such a unique and essential contribution.

S&TT 5 is composed of eight original stories as well as a short essay by scholar and novelist V.H. Leslie. As with previous issues, the stories employ a range of styles but are united by the strength of their authorial voices, and their success at combining literary craftsmanship with visionary weirdness. As with earlier volumes, the book itself is lovely, featuring evocative and melancholy cover art by Eric Lacombe.

Two tales that made a great impression on me, and that suggest the spectrum of approaches S&TT so successfully covers, were “New Wave” by Gary Fry and “Moonstruck” by Karin Tidbeck. The former believably examines a father’s relationship with his young son, a relationship haunted by the effects of grief and anxieties about mental illness. Following the psychological Gothic approach practiced by writers from Poe and Gilman to Hirshberg and McGrath, Fry incisively transforms a traditional ghost-story structure into something much more perversely illuminating and persistently unsettling. “Moonstruck” concerns the synchronicity between certain apocalyptic astronomical phenomena and a young woman’s coming of age, and bears thematic comparison to some of Angela Carter’s best short stories, minus Carter’s florid, allusive style, and more reminiscent of the starkly enigmatic prose of Anna Kavan.

V.H. Leslie’s essay, a meditation on Charlotte Perkins Gilman’s classic “The Yellow Wallpaper,” treads a thin line between scholastic rigour and popular accessibility. While I ultimately wanted more from it in terms of detailed analysis and context (it largely summarizes in a bite-sized, digestible way a few threads of extant scholarship on the story), this likely reflects my own academic tendencies more than any failings on the part of the essay. And though I’ve got reservations about the positioning of Leslie’s essay (stuck in the middle of the issue, betwixt stories it doesn’t do much to complement), I applaud Kelly’s decision to make non-fiction contributions a staple of the journal from this issue forward.

Kelly has indicated, both in his Foreword to issue 5 and on his website, that as of issue 6, S&TT will be moving to a “yearly trade-paperback anthology and eBook” format. While it’s disappointing that there will be fewer issues per year, I’m confident that the potentially larger size and wider distribution of this new iteration will more than make up for fewer editions.

So, until the appearance of issue 6, I’ll be here, hooked and urgently flopping at the end of this line, waiting for S&TT to reel me into another boat packed with dark, delightful cargo.

Sean Moreland is founder and fiction editor at Postscripts to Darkness, and a part-time English professor at the University of Ottawa.